Belogorsk is located on the Biyuk-Karasu River 42 km east from Simferopol. Roads connecting the republic's capital with the cities on the eastern coast, Feodosia and Kerch, pass through the city.

Originally, Belogorsk was named Karasubazar which means "a market on the Karasu" in the Crimean Tatar language. The name of the Karasu River literally means "black water," which in Turkic languages describes rivers that originate from underwater springs.

As indicated by numerous archaeological finds, people started settling in this picturesque area hundreds of thousands of years ago. The city was first officially mentioned in the 13th century chronicles. During the late Middle Ages, the city stood on the trade route from the Perekop Isthmus to coastal cities while Karasubazar was a major transit centre for caravans. The Great Silk Road was also close to the area.

During the Crimean Khanate's times, the city was the centre of a feudal entity, a kaimakanship. In 1736, the city became Khan Fetih II Giray's place of residence.

Belogorsk and the surroundings served as a location for several films, including The Headless Horseman (directed by Vladimir Vainshtok), A Man from the Boulevard des Capucines (directed by Alla Surikova) and Wonderful Valley (directed by Rano Kubayeva). 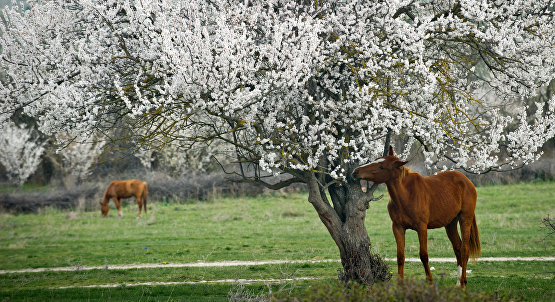 The city's climate is moderately warm, with the average temperature around 11.1°C and a substantial amount of precipitation throughout the year.

During the spring, the city is surrounded by orchards with trees in blossom. These will later produce fruit that will be sold during the summer months at markets and also will be found on sale by the roadside.

Late May is a good time to visit the Yellow Rock as many endemic plants start to flower and the entire territory turns into a rare flora nature reserve.

• The remains of a 15th century caravanserai still exist near the central market: they are the gate and some remains of the Tash-Khan Wall ("Stone Palace"). According to various sources, the caravanserai once measured around 10,000 sq m. Inside this beautiful two-storey stronghold with gun ports, two iron gates and four corner watch towers, there were 120 guest rooms, a well with drinking water, storehouses and a beautiful mosque without a prayer tower.

• The White Rock (Aq-Qaya) chalk mountain is the main attraction for tourists. The rock is 325 m above sea level, with a 100 m difference between the valley and the peak. On the top of the rock there are many stone pillars and difficult-to-access grottos. The easiest way to climb the rock is from the village of Vishennoye.

Curious travellers apart from experiencing amazing views will also be able to make many interesting discoveries. For example, one can find a 2,000-year-old Sarmatian inscription to the left of the entrance to the big grotto. Above the grotto, there is a cave where, the legend says, the Turks hid their treasures as they were fleeing Crimea.

• At the bottom of the rock, 2 km to the north of Belogorsk, in the village of Yablochnoye, there is the famous Suvorov Oak. The tree is more than 800 years old. It is 18 m tall and 4 m in diameter. There are four huge intertwined branches sprouting from the bottom of this strong old oak. Thanks to them, the tree is sometimes called Four Brothers. According to a legend, in 1777 the great Russian military commander, Alexander Suvorov, held negotiations with a Turkish sultan's confidant in the shadow of this tree. The meeting triggered off a chain of events that resulted in Crimea becoming part of the Russian Empire. 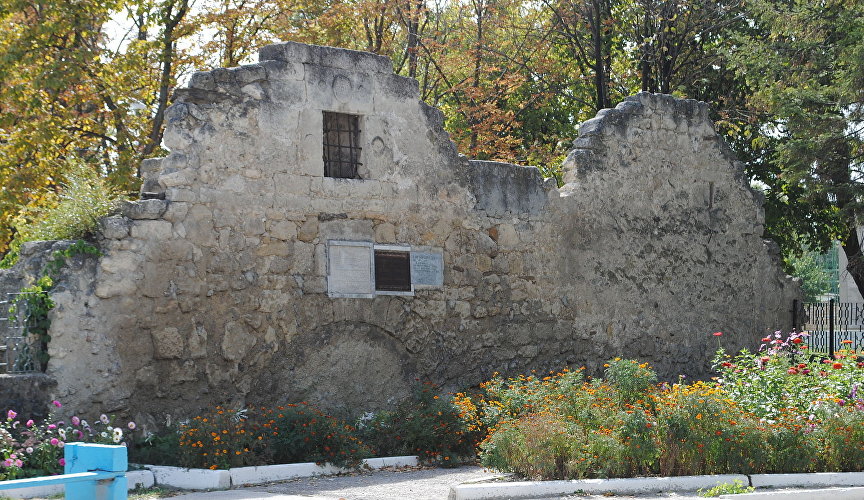 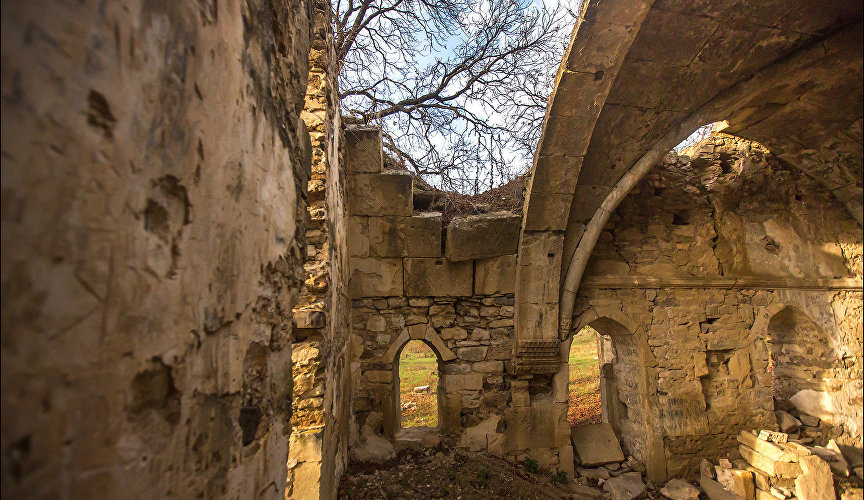 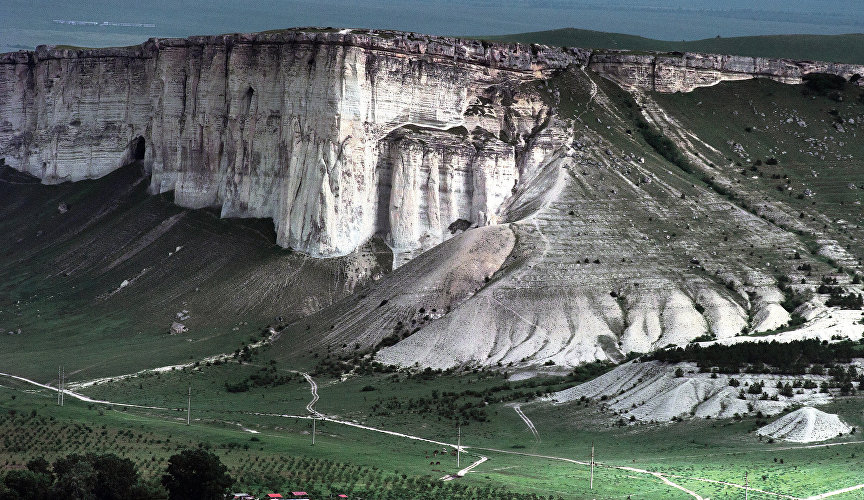 Remains of the Tash-Khan Wall

Remains of the Tash-Khan Wall

• The popular safari park, Taigan, is also located near Belogorsk. Spanning 34 hectares, the park is a comfortable home to camels, llamas, zebras, roe deer, deer, giraffes, hyenas, raccoon dogs, leopards, tigers, ostriches and vultures. A separate section measuring 20 hectares is occupied by 60 African lions who can be viewed in their natural habitat from the safety of observation bridges.

• The Kok-Asan Gorge, which is located 9 km from the village of Cheremisovka in the southern part of the Belogorsk District, is famous for its picturesque cascade of waterfalls formed by the Kuchuk-Karasu mountain river. Although the river bed runs through the gorge, the tourist trail is rather user-friendly and equipped with handrails, places to rest and bridges making it easy for anyone to navigate. At several points along the way, cascading water has hollowed out the river bed and created ‘baths' containing emerald water. The best time to visit the waterfalls is spring and autumn, during the rainy season. The reason is simple. Like most of the Crimean rivers, the Kuchuk-Karasu becomes too shallow during the hot summer months.

• A concrete stela on the side of the road with the silhouette of a horseman carved on it is a notable landmark on the way to the Cheremisovka Waterfalls. This is a monument to Tatar bandit Alim who protected the weak and poor. The story goes that he robbed the rich and then distributed money he had stolen among the poor becoming a people's hero. According to some legends, there are still hiding places in that area filled with gold.

• The Topolevka village (28 km from Belogorsk) is a very popular tourist spot. Forest rangers made a nice roadside picnic area just outside the village. There are two ancient Armenian churches and the St Paraskeva Toplovsky Convent in the village. The latter is known among pilgrims and tourists because of the springs nearby, which are believed to have healing powers. The convent is also a sanctuary for honoured Orthodox relics, a crucifix with hallows as well as ancient icons.

Available accommodation includes guest houses and a hotel near the Taigan Safari Park.

Accommodation can also be found in nearby areas, such as Krasnaya Sloboda, Zelenogorye, Ovrazhki and Krasnoselovka villages.

The distance between Simferopol and Belogorsk is 42 km. It is a one and a half to 2 hour drive.

There are daily buses from Simferopol Airport directly to Belogorsk, and to Feodosia and Sudak with stops in the city. Travel time is 45 to 90 minutes.

It is also possible to reach Belogorsk from Kerch. The distance between the two cities is 180 km and can be covered in 2 and a half hours by car. By bus it would take 3 to 4 hours.